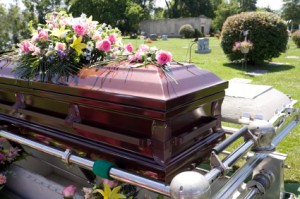 During funeral planning, one of the things most families already know is that they’ll need to have devices like pacemakers removed before a loved one can be cremated. Any medical device with an electronic component (pacemakers, internal cardiac defibrillators, etc.) has the potential to explode when in contact with the high heat associated with cremation.

However, prosthetics include much more than pacemakers. Prosthetic limbs, breast implants, fake hips, and even tooth fillings all fall under this umbrella category. While some of these items are easily disposed of, some—like expensive fake limbs—could be donated for future use.

When it comes to burial, you can put just about anything in the ground as long as it won’t contaminate the ground. Many people put additional items in caskets for this very reason. Medals of Honor, heirlooms, favorite books…all these things can be laid to rest with the deceased, and most prosthetics also follow these guidelines.

In many cases, the funeral director will remove dangerous devices like a pacemaker or hazardous ones like mercury fillings, but it’s rare that a family asks for the item back.

External prosthetics (those that can be easily removed) are almost always taken off prior to cremation. The family has the option of keeping the prosthetic, disposing of it, or donating it. Internal prosthetics (including fake hips, pins used to hold bones in place, or non-mercury tooth fillings) are usually kept intact while cremation occurs. They are then removed from the bone and ash fragments and disposed of separately.

Depending on the crematorium’s practice and the wishes of the family, the prosthetics may disposed of one of many ways:

There are also increasing options for donating these items to be reused by those in need. Although the European Union and the United States have rules that prohibit reusing medical devices, there are countries (particularly in the developing world) with such a strong need that these restrictions don’t apply.

The UK charity Pace4Life collects pacemakers from funeral homes to be repurposed for use in India. A program known as Project My Heart Your Heart is working to create something similar in the United States.

Prosthetic limbs are somewhat easier to donate, although they are also shipped internationally instead of used in the United States. Some of the organizations who can provide you with more information include the Amputee Coalition, Limbs for Life, and Standing with Hope.

How to Create a Memory Table

As you plan a funeral and prepare for the memorial service, you may want to gather items for display on a memory table. Many funeral homes ask you to provide mementos and pictures of the deceased as a way to create a visual representation of a li... more »

How to Pay for a Funeral

Although rates of advance funeral planning are on the rise, the majority of people aren’t financially prepared to pay for a funeral. With a price tag of anywhere from a few thousand to up to $10,000, it’s not easy to come up with the money necess... more »

Everything You Need to Know About Embalming

One of the many issues that will come up as you go through the funeral planning process is whether or not you'd like to have the deceased embalmed. Embalming, which is the procedure done to remove all the fluids in the body and replace them with a ch... more »