Funeral Etiquette: What to Expect at a Buddhist Funeral 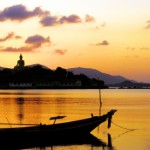 Buddhist funerals are very common in the Eastern part of the world, primarily in Japan, Cambodia, and Thailand. And while all these types of funerals have similar roots, they are each unique and varied. Buddhist funerals in the United States are even more unusual, in that they often draw from both Buddhist and Christian practices, often incorporating both viewpoints simultaneously.

This means that although there is a general format to the Buddhist funeral, there is no exact answer of what you can expect during your attendance. As is the case with any religious ceremony, your best option is to remain quiet and respectful, and to perform any tasks that are asked of you. Here are a few other traditions you might come across.

Body Preparation: Both burial and cremation are accepted practices in the Buddhist funeral tradition. If the body will be buried intact, you can expect an open casket and elaborate preparations of the body. Pay your respects to the deceased by offering a slight bow when approaching the casket.

Funeral Services: Several memorial services may take place within the week following death. These may be held at the home of the deceased, at a formal funeral home, or at a Buddhist temple. The services are overseen by a monk, minister, or priest who will read from the Sutras and possibly even lead the group in shared meditation. Most funeral ceremonies last about 45 minutes in length.

Appropriate Behaviors: Regardless of your personal faith, it is best if you act in accordance with the Buddhist funeral tradition while you are there. Sit when others are seated; stand when others stand. Refrain from recording the event on any type of digital device, and be sure to offer your condolences in a quiet and respectful manner. Quiet, understated clothing in dark colors is best; however, there is a good chance you will be asked to sit on a cushion on the floor, so make sure you wear loose and appropriate attire.

Memorial Receptions: In many cases, there will be a reception following the funeral. This often takes place up to a week later. Although this will be less formal than the service, there may be a spiritual and meditative aspect to the ceremony. Food will almost always be provided.

Funeral Flowers and Gifts: A sympathy card, funeral flowers, or a donation to a charity the family has chosen are all appropriate offerings to make to the family. Avoid calling, stopping by, or delivering food to the homes of the bereaved unless you have been invited to do so.

As is the case with any funeral, Buddhist funeral plans can range from the highly elaborate and formal to more easy-going affairs where friends and family members gather to laugh and talk and remember better times. Although many of the rites and ceremonies in a Buddhist funeral will be different than what you’re accustomed to, the primary objective is still the same: to honor the deceased, to show support to the bereaved family members, and to embrace the life we all have left.

Giving a memorial gift is a great way to show a loved one how much you care about their loss and the difficulties they’ll undergo in the months ahead. In addition to things like funeral flowers, people often choose pretty mementos like engraved pla... more »

When the news of Whitney Houston’s death became public on February 11, 2012, people of the world came together to share their shock and grief. Thanks to the prevalence of social media and how quickly information can be spread, the death of a high p... more »

What to Do After the Funeral

Oftentimes, we get so caught up in funeral planning we forget about things like all the funeral etiquette and bereavement issues that arise after the fact. No matter how well prepared you are for death, or how many funeral pre-plans are in place, it ... more »