What Can I Expect from Direct Burial? 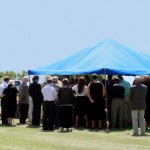 If you’re planning a funeral either for your own future or for the recent passing of a loved one, one of the options you’ll come across is direct burial. Like traditional burial arrangements, this plan involves purchasing a cemetery plot and interring the body into the ground. However, because you forgo embalming and a formal funeral service, you can typically save quite a bit of money on funeral costs with this option.

What is Direct Burial?

In direct burial, the body is buried very soon after death occurs. The deceased is typically buried in a simple casket or container rather than something ornate, and no embalming occurs to preserve the body. Additionally, there is no formal funeral service or memorial burial arrangements made, and the casket is not opened for viewing.

This doesn’t mean that you aren’t allowed to have a memorial service for the deceased. On the contrary, the sky is the limit when it comes to your funeral service options. You can have a formal gathering at your home, rent a space for a memorial service, or even set up a graveside service at the time the body is buried. In direct burial, you simply sidestep the formal funeral home arrangements in favor of something less traditional.

How Much Does Direct Burial Cost?

Burial costs vary depending on your location, the funeral home you choose, and the options that make this burial unique. Direct burial, which typically includes the funeral home fee, transportation of the body, and a basic burial container, can run anywhere from $1,000 to $4,000.

Additional funeral costs will arise for the purchase of a cemetery plot and/or graveside service held there, if you choose. These costs are considered separate from the funeral home fees.

Although one of the reasons to choose direct burial is to save money by avoiding embalming costs, local laws may require you to embalm. In some states, a body must either be buried within 24 hours or refrigerated (for up to 72 hours total) or be embalmed, regardless of your wishes. These laws are put in place for public health and safety reasons, and can not be disputed with the funeral home.

One of the primary reasons people choose direct burial is that it saves thousands of dollars on funeral costs. In many cases, financial strains require that you limit the amount of money you spend on a funeral. In other cases, it may simply have been the wishes of the deceased to be buried in a simple, informal manner.

If you are concerned about the financial aspect of death and burial, we encourage you to talk with a funeral planning organization to explore all the possibilities. From funeral pre-plans that cover all your needs to funeral insurance payable upon death, there are many different options that allow you to save money on your future burial arrangement needs.

The funeral planning industry encourages individuals to take responsibility for their own death and funeral plans. From fully prearranged funerals with every detail laid out and paid for, to funeral checklists and apps that outline individual wis... more »

Why Does a Funeral Cost What it Costs?

The average cost of a funeral in the United States is an estimated $7,500, not including costs associated with the cemetery and the actual burial or disposal of the remains. While this number seems high to anyone seeing it for the first time, funeral... more »

Practice Your Ethical Beliefs with a Green Funeral

As environmental awareness has grown, the idea of green funerals has become more and more appealing to those who wish to lessen their impact on the earth. From green coffins to funeral homes that have adapted an entirely eco-friendly approach, those ... more »