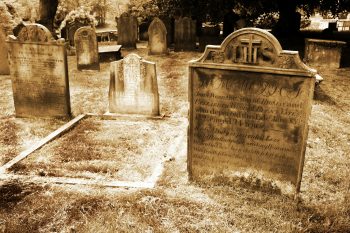 Take a walk through any historical cemetery, and you will likely find much more variability in things like headstones, grave markers, vaults, and the epitaphs engraved on them. Although most modern headstones all bear a similar appearance and carry familiar sentiments, older generations put a little more creativity into the act of saying a final goodbye.

Many of these epitaphs are funny; others are heartwarming. Some are simply meant to remind us all that death is not to be feared.

• Annie Jennings (Staffordshire, date unknown): Some have children, some have none; Here lies the mother of twenty-one.

• Aphra Behn (London, 1689): Here lies a Proof that Wit can never be Defense enough against Mortality.

• Captain Thomas Coffin (Cape Cod, 1842): He has finished catching cod, And gone to meet his God.

• David Hume (Edinburgh, 1776): Within this circular idea Called vulgarly a tomb, The ideas and impressions lie That constituted Hume.

• John Donne (London, 1631): Reader, I am to let thee know, Donne’s body only lies below; For could the grave his soul comprise, Earth would be richer than the skies.

• Saphronia Proctor (New England, date unknown): Here lies the body of Saphronia Proctor, Who had a cold, but wouldn’t doctor. She couldn’t stay, she had to go, Praise God from whom all blessings flow.

Apps for Death and Dying

These days, most of us spend several hours a day on our phones. We check email, send text messages, read the news, and keep up with social media. We play games, look at the weather, and sometimes, we even plan for death. That last one might n... more »

Cemetery Etiquette: How to Be Respectful when Touring a Cemetery

Visiting a cemetery is something that almost everyone does at some point in their life. Whether it’s a trip to a local cemetery to say goodbye to a loved one, a stop at a famous cemetery as part of a grief tour, or simply because you want to enjoy ... more »