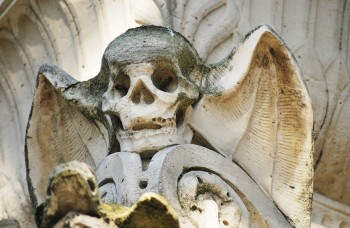 No place holds quite as much fear and mystery as a graveyard. Whether it is an historic old burial site no longer in use, or a modern cemetery with sleek marble slabs in place of traditional headstones, people have a way of getting nervous anywhere there are bodies buried in the ground. It is a fear that’s existed for thousands of years, which means there’s been plenty of time for superstitions to build up.

Here are a few of the more common (and unusual) myths surrounding graveyards.

These days, superstitions about graves are more entertaining than scary, but it is a good idea to always be respectful. Do not remove anything that does not belong to you and keep the noise to a minimum – the other families in attendance will thank you for it.

One of the most memorable parts of a funeral or memorial service are the stories people tell about the deceased. Whether part of a formal eulogy, or an individual standing up to share a favorite memory, these are the things we carry in our hearts... more »

The Role of Animals in Grief and Bereavement

Human grief is often one of the first things we are trained to recognize after the loss of a loved one. Funeral homes and funeral planning experts have countless resources on hand to help direct people toward bereavement services, medical professiona... more »

When it comes to funeral planning, just about every culture and every family has their own list of traditions. Whether the traditions are as lighthearted as everyone wearing the color red in honor of the deceased's favorite color or as somber as obse... more »