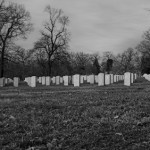 Choosing a cemetery is an important part of the funeral planning process. Unlike a casket or funeral clothes, which remain underground and eventually decay, the gravestone and cemetery are the visible and lasting reminders of the deceased’s legacy. Throughout history, humans have placed great importance on the final place of rest, even going so far as to construct elaborate structures for the purpose.

Although today’s cemeteries and gravestones tend to be more understated than what was expected just a hundred years ago, they still carry great importance to the family members and descendants left behind. Here’s a quick look through American history and our shared focus on this most important of burial rites.

• During the first years of America’s existence as a nation, a heavy emphasis on religion made burial a somber affair. Most families were buried together in makeshift cemeteries, and their headstones contained skulls with or without wings (known as the death head). They were often accompanied by Bible verses or strictures on the sins of humanity.

• These headstones gave way to more uplifting images like weeping willows, urns, and angels in the eighteenth century. The messages inscribed on the limestone headstones moved away from the ominous side of death and began incorporating messages of love and hope, often personalized specifically for the deceased. At this time, cemeteries were also moved outside of towns or built attached to churches, and they became a gathering place for families. It wasn’t uncommon for plants and trees to be put up as decorations, and entire day visits to the cemetery would be planned.

• In the nineteenth century, cemeteries weren’t just a place to bury the dead—they were public parks noted for their beauty and ambiance. As such, elaborate mausoleums were not only a mark of respect and affluence, but they contributed to the community good. Cemeteries were master-planned and laid out according to rank and wealth, and entire families were laid to rest within a reserved area.

• Today, cemeteries have once again become more understated, somber places. Set apart from residential communities and often gated for privacy, visitors typically come to pay respect to their loved ones, but don’t linger any longer than necessary. Although many memorial gardens and other landscaping aspects keep things looking nice, the gravestones themselves tend to be simple and understated, composed of granite and other long-lasting materials. Columbariums, the structures built to house cremated remains, have also grown in popularity and retain the more formal look.

Because of their charm and look of old world decay, older cemeteries remain popular places to visit and to take in the sights, even today. In some cases, you might even be able to purchase burial plots that are extensions of the older cemeteries. As is the case with any type of land, however, you can expect to pay more for “premium” burial real estate.

If you’d like to visit some older cemeteries, or are funeral planning and want to get ideas for a unique burial plan of your own, the best place to start is on the East Coast. Many of these early sites are now part of the National Register of Historic Places, and make for a great vacation destination. As is the case with any place of rest, you should always be respectful and take care not to damage any of the structures.

Many of the activities undertaken during funeral planning are designed to preserve the memory of a loved one. From embalming a body for a final viewing and grave memorials to cremation jewelry, today’s funeral options fill a need for mourning f... more »

When the news of Whitney Houston’s death became public on February 11, 2012, people of the world came together to share their shock and grief. Thanks to the prevalence of social media and how quickly information can be spread, the death of a high p... more »

Caskets: Should You Buy at The Funeral Home or Online?

Choosing a casket for a friend or loved one is not a simple process – between choosing a special casket that represents the tastes of the deceased to deciding what materials the casket will be made of, many grief-stricken family members are too ... more »