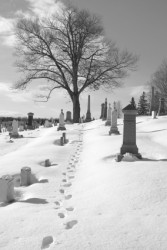 The behind-the-scenes aspect of the funeral industry is one that remains a mystery to many people. Often because we don’t care to know the gritty details of death and burial, and sometimes because we aren’t sure what kinds of questions to ask, or what funeral directors and funeral homes do to care for your loved ones isn’t always widespread knowledge.

One of the often overlooked details of burial is what happens during the winter months in colder climates, when the ground is frozen. Frozen turf is difficult (and expensive) to dig into, especially at the depth required for human burial. When combined with other harsh winter hazards like unplowed roads, unsafe driving conditions, and the snowfall on the cemetery itself, the results are not conducive to immediate burial. That’s why many of the colder states (think Alaska and North Dakota) have contingency plans in place.

Few states have laws in place to regulate winter burials. Some, like Minnesota, Wisconsin, and New York, require burial in the winter regardless of weather conditions. Others might allow you to opt for a “cold storage” option to avoid the heavier fees of opening a grave in the winter.

In this instance, “cold storage” isn’t as terrible as it seems. Funeral directors may keep bodies in cemetery crypts or inside the funeral home until a date when the ground thaws enough to allow for burial. This practice is one that has existed for hundreds of years. If winter burials are difficult in our age of backhoes and jackhammers, it’s easy to imagine how hard it would have been in centuries past. And because older generations didn’t have access to morgues and other indoor body storage options, it was common to keep bodies in a crypt until spring.

The Difficulties of Winter Burial

From a logistical standpoint, winter burial is only a small complication. The remains of a loved one can stay in storage for months without creating problems in the decay process, and chances are you’ll never know the difference.

However, delaying a burial because you want to be present at the time of the body being lowered can provide an additional emotional trauma. In this case, families may have to undergo two separate mourning periods—the first in which you cope with the initial loss, and the second in which you revisit the death to say your final farewells. This, when combined with the idea that your loved one’s body is sitting in a vault with others awaiting burial, might prove too difficult on the family.

Because waiting for burial isn’t something everyone can do, there are alternative options. In addition to cremation, which can be performed year-round, you can usually pay extra for a winter grave opening. (Expect additional costs between $350 and $1,000 for labor and equipment.) You might also opt to have the body shipped to an alternate location. If you had some question about where you wanted the deceased to be buried (and you haven’t already pre-paid for a burial plot), changing locations can streamline the winter burial process.

5 Legal Documents to Fill Out Before You Die

Preparing for death is not only a matter of reaching a state of emotional and spiritual acceptance of your fate. Although coming to terms with your own mortality is an important part of the cycle of life, you also need to take some time to deal w... more »

What Can I Expect from Direct Cremation?

One way in which families are saving on costs during the funeral planning process is to consider direct cremation. This process, which entails cremating the deceased without a funeral service, embalming, or body viewing, is the most streamlined optio... more »