Are Funeral Expenses Deductible on My Taxes? 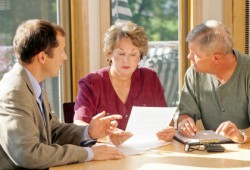 The unexpected funeral costs that arise after a death often put a strain on family finances. With a total price tag anywhere from a few thousand dollars to over ten thousand dollars, paying for a funeral out of pocket is like asking a family to buy a new car. This is a cost few families can cover outright, which is why it’s no wonder that the question of whether or not you can make funeral expenses deductible on your taxes is one that regularly pops up.

The easy answer is no. For the majority of families, the costs they must lay out for a funeral are like any other major purchase (along the lines of a car or new furniture). Funeral expenses are your responsibility, and the government won’t give you any tax breaks come April 15.

However, there are exceptions to the rule—especially if you’re dealing with a larger estate, which functions as its own legal entity, and is therefore held to different regulations.

Although you should always take with your estate lawyer or accountant before you make any decisions regarding your taxes, here are a few of the more common facts regarding funeral expenses and tax deductions.

Although funeral expenses aren’t tax deductible in the traditional sense, there are ways to avoid the heavy burden of funeral costs. Plan ahead, consider options in green burial or cremation, and ask for funeral payment plans from the funeral home of your choice.

Can I Hold a Funeral before Cremation?

One of the nice things about funeral options today is that families have choices when it comes to how they want to take care of a loved one’s final remains. Burial, cremation, body donation, sending your body into space—with enough money, you can... more »

When most people go into a funeral home expecting to plan a funeral, they have a pretty good idea of what they can afford to pay and how they want to spend their money. Caskets, use of the facilities for a memorial service, funeral flowers, and embal... more »

What are Funeral Concierge Services?

Even with the recent popularity of pre-arranged funerals and so many people taking steps to ensure that funeral costs are covered years in advance, few individuals know exactly how to plan a funeral. The actual details of the process, including thing... more »