Can I Hold a Funeral before Cremation? 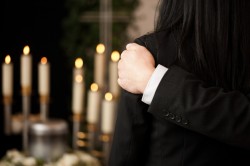 One of the nice things about funeral options today is that families have choices when it comes to how they want to take care of a loved one’s final remains. Burial, cremation, body donation, sending your body into space—with enough money, you can do almost anything to make your final farewell special.

While most of us will probably skip the space step, burial and cremation remain the top choices across cultures and religions. Cremation is less expensive and generally comes with less fanfare than burial, but burial itself can also be streamlined thanks to options in DIY casketry and direct burial.

For those who want more ceremony instead of less, you can also opt to hold a full traditional funeral prior to cremation. Most of us assume cremation is a behind-the-scenes affair in which the body is taken straight from the morgue to the crematorium, and all families get is an urn full of ashes to say their goodbyes. In reality, cremation can be as formal as you want it to be. In fact, you can have the full “burial” ceremony—including embalming the body, having an open casket viewing, and holding a funeral at the funeral home—prior to cremation. The only step missing is the lowering of the casket into the earth at the cemetery.

Why Hold a Full Funeral?

Funerals hold an important place in our society. For many families, it’s impossible to say goodbye without being able to kneel beside the casket or say a final few words. Others need the officiant to preside and say the proper prayers before they feel a sense of closure. Still others might take comfort in having family members and friends gather from all over the world to share in these traditions.

Cremation is sometimes avoided because families feel there is no way to honor all these traditions while also opting for ashes. However, funeral homes are equipped to handle both sides of the equation, and can easily streamline both processes. The only difference between the burial ceremony and the cremation ceremony are:

Otherwise, things can remain as much the same as you want them to. Hold a wake. Have a funeral luncheon. Broadcast the funeral online for out-of-town mourners to share.

In order to make the burial/cremation process easiest, find a funeral home that specializes in both types of interment. Because most funeral homes are able to offer both burial and cremation without any difficulty switching between the two, you should be able to hold as much of a traditional funeral as you want at the funeral home while also choosing to have the deceased cremated.

You may not end up saving much on funeral costs this way, but you can take care of matters in a way that is respectful, fulfilling of the wishes set out by the deceased, and also beneficial to the mourners left behind.

Should I Have a Funeral Procession? Pros and Cons of the Processional

If you are planning the funeral of a loved one, an option that will arise during the decision-making process is whether or not you want to include a funeral procession. These processions, usually accomplished via a long line of cars that travel f... more »

Funeral planning is never an easy task, especially since it’s something few people are trained for (and because it’s something you hopefully don’t have to practice very often). Being caught unaware of the correct protocol is one of the easiest ... more »

Benefits of an Outdoor Funeral

Most funeral plans revolve around a fairly traditional ceremony. Whether at the funeral home or at a local place of worship, family and friends gather to say prayers, sing hymns, share stories about the deceased, and pay their parting respects. While... more »