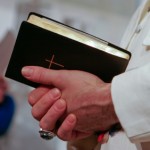 When you’re planning a funeral, it is important to adhere to the religious beliefs that sustained the deceased during his or her lifetime. Not only does this honor the life of the deceased, but it often brings great comfort to those he or she left behind, as well.

One of the most well-known types of burial arrangements belongs to those of the Catholic faith. Catholics believe that in addition to grieving during a funeral, it’s also a time of rejoicing for the passing of the deceased into eternal life. Depending on how traditional the deceased’s beliefs and the church he or she attended, a Catholic funeral can be a long and somber event or a more lighthearted affair.

What Happens During a Traditional Catholic Funeral?

Like most funeral plans, a Catholic funeral is overseen by a religious official—usually a priest. Like a funeral director, the priest will help you make decisions and plan the funeral in accordance with the wishes of both the Church and the deceased. He will also be responsible for giving the Mass (when applicable) and helping family members and friends to find comfort in the days, months, and years to come.

Many Catholics choose to participate in a vigil in the days leading up to the funeral (usually the night before). This prayer service is held at the church, the funeral home, or possibly even the home of the deceased or a family member. The service is almost always religious in nature, and it is also considered a time to share stories, memories, and possibly even give eulogies.

During the funeral itself, prayer and Catholic rites are likely to play a role. Many of these will echo the regular Sunday gathering (including communion, hymns, psalms, and favorite prayers). More traditional Catholics may also request a Requiem, or Funeral Mass.

How are Catholics Buried?

Traditionally, the Catholic faith calls for individuals to be buried intact, as there is a great respect for the body and eventual resurrection. Many of the rites performed during a Catholic funeral actually include the body (for example, the feet are directed toward the altar, the body is sprinkled with holy water, and an absolution is said), so it is considered ideal to keep the body whole.

However, the Church has sanctioned cremation if that is what the deceased wished for, and if the reasons for cremation are in keeping with Christian motives. In most cases, the cremation is kept separate from the funeral service, and a different ceremony for interring the cremains in the ground or in a favorite location might be held.

At the cemetery, the grave is blessed by a priest before the deceased is laid to rest. There are separate Catholic cemeteries that don’t require this additional step, but these are typically found on a church’s grounds or within a predominantly Catholic community.

A traditional Catholic funeral isn’t for everyone—even if the deceased was a practicing Catholic in life. The best way to determine for sure what type of ceremony is desired, it’s a good idea to start funeral planning in advance. In addition to setting aside funds to cover funeral costs, you can use this time to lay out your wishes and talk with your spiritual advisor to make your final decisions.

Department of Health and Burial Assistance

Even though over 40 percent of Americans opt for cremation over burial, there are still many different kinds of religious, cultural, and personal taboos that make cremation a difficult decision. This is especially true if your family has traditional ... more »

If you’re a fan of recycling, turning down the thermostat, and otherwise doing your part for the environment, then you may have already considered a green funeral in your funeral planning process. If you simply like to save money, however, you migh... more »