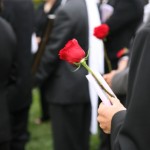 These days, there are as many types of funerals as there are types of people. From funeral planning efforts that include web memorial services to those that might find you placing a loved one’s remains in a container bound for space, you can personalize a funeral to match the personality and beliefs of the deceased.

However, while all these these funeral plan options are great for putting your loved one to rest in the manner he or she would have preferred, there is something to be said for tradition. In fact, one might argue there’s quite a lot to be said for tradition: the majority of U.S. funerals still follow the traditional pattern that has been favored for centuries.

What is a Traditional Funeral Ceremony?

The most common funeral plan across religious denominations includes a four-step process:

1. Body viewing (also known as a wake)
2. Formal service
3. Transfer of the body
4. Burial or interment of the remains

Although there are certainly variations of this process (for example, you could choose cremation or have a formal service after the burial takes place), these steps are fairly standard across the board. That’s because each step offers a different mourning component—all of which are necessary in moving positively through grief.

The Body Viewing (or Wake)

The body viewing has both religious and historic ties. Before funeral homes made it possible to preserve the body, the time between death and burial was a short one. Keeping the body at home (usually in a parlor or other off-set room) was necessary as a way to store the remains of the deceased until the grave was prepared. Although some wives’ tales tell us this time was used to ensure that the deceased wouldn’t return to life, the body viewing is really more of a ceremonial time in which friends, relatives, and acquaintances can say their final goodbyes.

Today, the body viewing is held in a funeral home either the day before the funeral or in the hours leading up to the ceremony. This may or may not include an open casket.

The ceremony or funeral service is a time for everyone to gather and celebrate the life of the deceased. Overseen by a religious official or a funeral director, this typically occurs at the funeral home or a church—and can either take place right before burial or in the hours following it. For cremations, the ceremony may be held outside at the location where the cremains will be scattered.

The service can last for up to a few hours in length (especially if there is a mass or other religious ceremony). This is the time when family members and friends share stories, say prayers, read poems, sing songs, or look at videos and photographs of the deceased.

The Transfer of the Body

Once the service is completed, it is necessary to transport the remains to their final resting ground. Traditionally, this involves a hearse and procession—once a carriage and horses, with only men following behind; now a procession of cars and/or limos making their way to the cemetery.

This step is the one most often skipped in modern funerals, since it can add to the funeral costs to have a procession move through the city streets (in this instance, it is necessary to hire an outside company to help stop traffic). However, almost all funerals with caskets have pallbearers, who are responsible for carrying the casket from the funeral home or hearse to the cemetery plot. This ceremonial rite is deeply moving for many family members, and continues to be one of the more popular traditional funeral choices.

If there is one area in which the most personalization takes place, it is during the burial. More traditional funeral plans have a second ceremony at the cemetery, typically open only to close family members and friends. It includes lowering the body into the ground and saying final goodbyes. Other funeral plans might have you placing an urn into a burial spot or mausoleum, or you may be scattering the remains in a beloved garden or fishing spot.

It doesn’t matter if you’re pre-planning a funeral in advance, or if you are getting ready to say goodbye to someone in your life—traditional funerals remain a staple in the funeral industry. Any personal touches you’d like to include along the way should be discussed with your funeral director, and chosen carefully. While more modern funerals are becoming popular, many people derive comfort from these time-honored traditions and what they mean for those who have gone before us.

Who Makes the Funeral Decisions?

When a loved one dies, there are many decisions that will have to be made about what to do with the body, where to plan the funeral, and what to do about other financial and personal issues. Most people know that the default person responsible fo... more »

Death Masks for a Modern Funeral

For thousands of years, people have been working hard to capture the memory of the loved ones they have lost. As early as the ancient Egyptian culture, death practices and funeral planning efforts have included a burial mask, or an impression made of... more »

If you are planning a funeral either in advance or soon after the death of a family member, you may want to consider military funeral benefits. In some cases, you can receive financial assistance in covering funeral costs; in others, you may receive ... more »