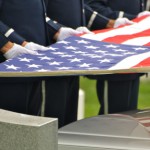 If you are planning a funeral either in advance or soon after the death of a family member, you may want to consider military funeral benefits. In some cases, you can receive financial assistance in covering funeral costs; in others, you may receive ceremonial privileges that will allow you to send your loved one off with the honor and respect achieved over a lifetime of hard work and devotion.

The traditional components of a military funeral—including the playing of Taps, a gunshot salute, a drumming corp, a flag ceremony, or even a procession of guards—range from simple to ostentatious, depending on the contributions of the individual to our country and how he or she wished to be honored in death.

Who is Eligible for a Military Funeral?

Not everyone who serves in the military is automatically granted a military funeral. In most cases, the requirements include someone who was:

• A war veteran (not dishonorably discharged)
• Killed in wartime efforts
• Under active duty in the U.S. Armed Forces (or Selected Reserve) at the time of death
• Able to complete a full term of enlisted duty during his or her life
• A serviceman or servicewoman discharged due to disability or injury in the line of duty

Additionally, the degree of the honors bestowed upon the deceased depends on the type and scope of military service rendered. Considerations that will impact what the deceased qualifies for include:

Immediate family members—even if they didn’t serve in the military—may also be eligible for some benefits. For example, they may be granted a chaplain and/or casket team for the service.

What Does a Military Funeral Include?

• A military chaplain
• A casket draped in the U.S. flag
• Honor guards serving as pallbearers
• Casket transportation
• Rifle party and a three-to seven-volley salute
• Playing of the Taps (via a lone bugler or recording)
• Final Salute

If you aren’t certain if you or a loved one is eligible for a military funeral, or if you’d like more information, please visit the Department of Veterans Affairs or the Military Funeral Honors website sponsored by the Department of Defense. These websites can offer support and resources for funeral
planning, regardless of what planning stage you’re currently in.

How to Use the Internet to Plan a Funeral

If you’re reading this blog post, you already have some idea that the Internet can be a valuable funeral planning tool. Because of the wide availability of information online, and because more and more funeral homes are providing price lists and se... more »

One of the most overwhelming and often overlooked aspects of funeral planning is taking care of the gravesite long after the deceased has passed on. Although most cemeteries offer some form of on-site caretaking (such as mowing and weeding, clearing ... more »

What To Do When Someone Dies: Social Security and Other Government Organizations

Many times, the death of a loved one occurs when he or she has reached an advanced age—an age at which Social Security, Medicare, and Medicaid are part of the financial structure of his or her estate. As part of the funeral planning and estate diss... more »