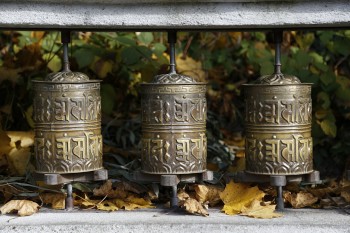 For most of history, funerals were planned according to the beliefs, traditions, and rituals of a single religion. Not only did this make things easier on the family, but it also made things easier on the community as a whole. When someone died, there were “rules” to follow—rules that had been in place for centuries and that dictated everything from what you did to how you were supposed to feel.

These days, it is becoming much more common for families to opt for multi-faith funerals (also known as interfaith funerals). This occurs when a family has several religions, when a loved one changed faiths during his or her lifetime, or when a marriage brought an additional culture into the family. Like a wedding ceremony, one side of the family might be pushing hard for a traditional Christian funeral while the other would prefer to keep the observances in line with the Buddhist faith.

When this happens, the most important thing to do is be flexible and open to communication. Planning any funeral is difficult; when you add multiple religions and ideas and opinions, the results can quickly grow out of hand. However, because the goal is a peaceful goodbye that honors your loved one, you should be prepared to work together.

Step One: Find a Mediator

The first thing to do is meet with a funeral director or any religious leaders who can help oversee the process. In many cases, it is easier for priests, pastors, and other outsiders to make decisions, since they won’t have the emotional burden you are carrying. Although you most likely won’t need a formal mediator (unless things get too complicated), a designated person in charge can help keep things organized.

Step Two: Determine What is Most Important

Every religion and culture adheres to certain funeral customs for a reason. In the Jewish faith, it is critical to get the body into the ground within three days and to avoid embalming of any kind. A traditional Catholic funeral might require a wake before the funeral service takes place. Each side needs to determine what, if anything, is the single most important aspect of the funeral. All other requests will have to be taken into consideration after these are addressed.

Step Three: Focus on the Deceased

Someone who was multi-faith in life likely faced difficulty picking and choosing religious customs all the time. Take your cue from them. Did they love the chamber music of their Catholic side? Make sure it has a place at the funeral. Was their Buddhist side strongly eco-conscious? Skip the funeral flowers and opt for a green burial instead. Did their Southern heritage take the shape of huge gatherings full of laughter and food? Throw the best funeral after-party you can. By prioritizing what they loved about their various cultures instead of what you consider most important, you can create a truly personal and memorable send-off.

What makes a funeral is not the church it is held in or whether or not the body is on display—it is the people who are in attendance. Embrace the great variety of life by asking everyone to bring a token of their own culture or religion in honor of the deceased. The results might not be the traditional funeral you are accustomed to, but you won’t regret having everyone there with open hearts and sharing their love

How to Give a Eulogy for a Relative

For many people, giving a eulogy for a family member is one of the most difficult aspects of a funeral. Regardless of your feelings on public speaking, the act of standing up in front of a crowd and sharing your pain and emotions is hard to do. A... more »

What is Cremation? Cremation is a way of disposing of bodily remains that is both economical and ecologically friendly. Although many people choose cremation for personal, cultural, or religious reasons, the reality is that most people opt for cre... more »

Is Cremation Appropriate For Everyone?

Cremation is becoming an increasingly viable choice for those who wish to step away from traditional burial platforms. With lower overall costs, a healthier environmental stamp, and the ability to personally connect with the deceased remains, there a... more »