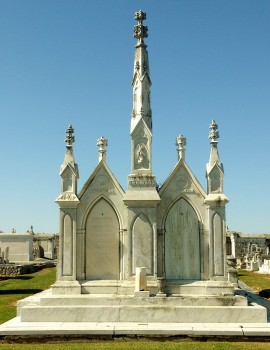 Although few people associate cemeteries and death with their ideal vacation plans, visiting local cemeteries is actually a popular tourist practice. Fusing history and nature, cemeteries have a way of capturing a city’s culture in ways that more traditional tourist sites do not—and because they are almost always free to the public, they provide a low-cost alternative to many kinds of national monuments, museums, and theme parks.

These famous cemeteries provide even more incentive. They house celebrities and historical figures, play an important part in history, and provide beautiful examples of landscaping and architecture. If you find yourself in the area, they may be worth a second look.

Other famous U.S. cemeteries include places like DC’s Arlington National Cemetery, Atlanta’s Oakland Cemetery, and Fort Rosecrans National Cemetery in San Francisco. No matter which coast you are on or where your travels take you, you are sure to find notable burial sites and great opportunities to walk through history.

How Many Cemetery Plots Should I Buy?

One of the most common ways to begin your funeral pre-planning is to purchase a cemetery plot well in advance of death. Because these parcels of land are fairly expensive (expect them to range between $2,000 and $4,000), getting the payments done and... more »

When it comes to funeral flowers, arrangements for the service itself tend to be the main focus. Casket flowers, wreaths in the shape of a circle or cross, and elaborate funeral sprays sent from relatives fill the mourning space with the fresh scent ... more »

Sending funeral flowers to the funeral home or memorial service of a loved one is a great way to show your support. Long held as the standard in traditional funeral planning, flowers add a touch of elegance to the ceremony and also serve as a lasting... more »