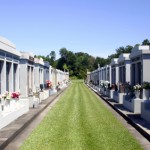 Mausoleums are an alternative to earth burial that places the body to rest in an above-ground crypt. Most often associated with New Orleans, where the moist ground makes it impossible to bury human remains underground for any length of time, mausoleums are usually small house-like structures that are organized in a cemetery alongside other interment options. While beautiful and stately, mausoleums do have a tendency to be more expensive, and may even come with stipulations like sharing the space with other families.

Mausoleums are one of the oldest types of formal burial in the world—in fact, the ancient pyramids of Egypt and the Taj Mahal in India are both examples of some of the more elaborate mausoleums in human history. The term is used to describe any outbuilding in which caskets are entombed, whether it is just one casket or several crypts in which various bodies can be laid to rest.

Mausoleums have several benefits. These include:

Of course, they come with their own drawbacks, as well. Things to keep in mind when considering a mausoleum include:

In some locations, you might not have a choice about whether or not you want to opt for a mausoleum or earth burial. In others, the mausoleums might be a higher-priced, more elegant alternative to traditional burial. Whatever your decision, mausoleums have been in existence for centuries and will continue to provide a way to say goodbye to loved ones in a manner befitting their life.

Playing music at a funeral is something almost all cultures and religions do in some form or another. Pianos or organs, a vocalist or harpist, pre-recorded songs that accompany the procession—there is something about music that speaks to the so... more »

What to Expect from a Traditional Catholic Funeral

Catholic funerals are some of the most ornate in terms of tradition, regulation, and procedure. Although the church has loosened some of its rules in recent years (and most will allow burial alternatives like cremation), you can still expect there to... more »

Should I Hire a Funeral Planner?

If you're like most people, funeral planning is not something you've ever had to do before. Unless the deceased took the steps necessary to pre-plan the entire funeral, chances are you will need to make decisions and coordinate services over a span o... more »