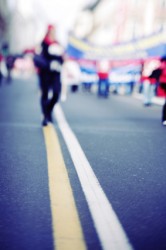 In a country where free speech reigns and everyone is entitled to his or her opinion, the rights of mourning families regularly come into question. This is never more true than when military funerals or other funerals of high public interest occur. On the one hand, it is important that those who are grieving are able to plan a funeral and say goodbye in a way that is respectful and private. On the other hand, the United States works hard to allow organizations to voice a protest in keeping with their rights as citizens.

In August 2012, President Obama signed the Honoring America’s Veterans and Caring for Camp Lejeune Families Act of 2012 into law. Foremost among the law’s details, there are now restrictions in place to keep protestors at military funerals a discreet distance from the mourning family.

Under this new legislation, any protests (usually held in response to the individual’s private life or as a larger protest against military service) must be held at least 300 feet from military funerals. Likewise, these groups are prohibited from forming two hours before or after a service in order to give the family a wide berth. The law directly counteracts a 2011 Supreme Court ruling that allowed public displays as protected under the First Amendment.

What This Means for Funeral Planning

This law is designed primarily to keep picketers and protesters away from military funerals in military cemeteries, which have the manpower to enforce the regulations. For the average family who may be burying a loved one who lived or died in the public eye, the same rules do not apply.

However, that doesn’t mean you have to open a funeral to the public or otherwise suffer for your loss. Private cemeteries and funeral homes can and do prevent individuals and groups from picketing a funeral, and you can keep all the details quiet to avoid a large following. You can also hold a private memorial service in a private home and attend to the burial at a later date, possibly when some of the public interest has died down.

Losing a loved one is never easy, and having the media or other hate groups turn a death into a public spectacle is even worse. If you fear a public outcry at the funeral or in the days that precede it, be sure and talk with a funeral home about what kind of protection you can legally and professionally apply.

Containers to Use Instead of an Urn

When you have a loved one cremated, there are countless ways you can dispose of the ashes left behind. People store them, scatter them, bury them, and put them on display. Some innovative companies even allow you to transform them into other types of... more »

Who is Responsible for Burial Costs When a Loved One Dies?

If an individual passes away without any advance funeral planning in place, it can be difficult to know who is responsible for funeral costs. Few people can afford to foot the bill for a funeral all by themselves, and in a situation that’s already ... more »

Things to Ask Your Funeral Director

Whether you're funeral planning for yourself or facing the recent loss of a loved one, you will most likely work with a funeral director to ensure that all the burial and/or cremation arrangements are set. Funeral directors are the professionals who ... more »