Human Burial in a Pet Cemetery 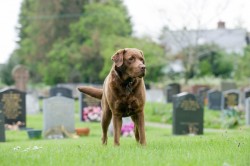 There’s good news for pet lovers who want to spend eternity by their beloved animals’ side—according to new regulations in the state of New York, it’s now legal for pet cemeteries operating in the state to accept human remains (in cremated form) to be buried alongside deceased pets.

A dispute about the legality of this practice was brought to light several years ago, when New York state officials refused to let Hartsdale Pet Cemetery (the largest and oldest pet cemetery in the world with over 70,000 pet burials to date) accept the ashes of a man who wished to be buried next to his three Maltese dogs and his wife’s ashes, which were already interred there. The state intervened, stating it was an unlawful practice.

It took years of legal hurdles, but that ruling was overturned, and it is now legal for all pet cemeteries in the state to accept human remains. There are, however, caveats. To prevent pet cemeteries from turning this into a predatory practice, they are not allowed to charge a fee for human burial, and they may not advertise their human burial options. And only cremated remains are allowed—no traditional burial or caskets are to be included in this ruling. And charges may apply for things like a new headstone or other grave marker.

Other states have yet to make rulings on this issue, but it’s only a matter of time before similar issues arise in other parts of the country.

Many people scoff at the idea of paying money for a pet burial in a formal setting like one, but the truth is that the loss of a pet is often just as catastrophic as human loss. Pet cemeteries offer a way to say goodbye to your loved one in a manner that fits with your relationship in life, and having a safe place to go visit can help in the stages of bereavement that follow.

If you’re interested in being laid to rest alongside your pet, it’s a good idea to talk to a pet cemetery during your advance funeral planning stages. Because not every state has regulations in place regarding this issue, it’s important to know your rights and responsibilities, and to get your plans in writing, when possible.

Who Should Be Involved in Planning a Funeral?

Whenever the subject of funeral planning comes up, the topics almost always revolve around the what, where, and how of the process. What did the deceased wish to have done to his or her remains? Where will the funeral and interment be held? How will ... more »

Why it Matters: Dove Releasing and Other Funeral Ceremonies

It’s becoming a growing trend in the funeral industry for families to hold elaborate ceremonies to accompany the memorial service. From dove releasing ceremonies, in which classic white birds are set into the air, to bagpiping or even a procession ... more »

What to Expect from the Cremation Process

Cremation arrangements are an increasingly viable and popular choice in the United States for families wishing to step outside the traditional burial scenario. An ancient practice that actually dates back thousands of years, cremation provides you wi... more »