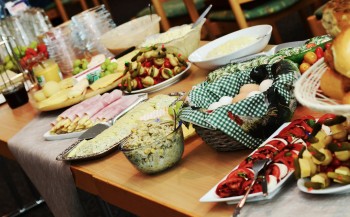 These days, a wake is considered more of a formal tradition of the past than a way to say goodbye to a loved one. Historically, wakes were held when families cared for the body of a loved one at home (as opposed to a funeral home). There was no central location where bodies were prepared for burial, so families would keep the body in a room in the house for the one or two days it would take to make all the arrangements.

In this context, the wake typically occurred the night before the funeral, with family members holding an all-night prayer vigil over the body of the deceased. Because so many people were gathered under the roof, it was necessary to provide refreshments for everyone, which is where the idea of drinking, eating, and having a kind of low-key celebration came into play.

Because few families have the space (or the stomach) to keep a loved one’s body at home until it is time for burial, today’s wakes are more of a ceremonial ritual than an actual vigil. They have become more boisterous and livelier, with a focus on celebrating the deceased’s life instead of mourning their death.

Characteristics of a modern-day wake include:

While wakes can be one of the most memorable ways to say goodbye to a loved one, it is important to remember that they are not for everyone. Some people may take offense at death being treated lightly, or at the idea of friends gathering in a raucous celebration before the funeral takes place.

Always check with the family before you hold a wake that is open to all, and try not to let the celebration aspect take over the real reason behind the wake in the first place: the loss of someone you all loved, the memory of a life well-lived, and the tribute to a historical tradition many people hold dear.

Funeral Insurance for the Elderly

The time of life when most people take care of funeral planning—in their eighties—is the one time when things like life insurance and retirement packages are hard to come by. There is no question that the best time to set funds aside for a fu... more »

Any time you search online for funeral prices and burial costs, you are likely to find a familiar caveat: how much you will end up paying depends on where you live. This is not a very helpful statement if you are looking for specific funeral c... more »

Almost all modern funeral services have some sort of musical component to them. Ranging from elaborate jazz funerals in the grand New Orleans tradition to simply playing a CD of favorite songs during the memorial service, music provides a great way t... more »