Who Should Serve as Pallbearer? 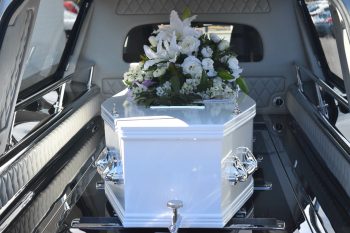 Who Should Serve as Pallbearer?

If you are holding a traditional funeral and traditional burial, then it is likely that you’ll need pallbearers. These individuals are responsible for lifting and carrying the casket from the funeral to the hearse or burial site. The term “pallbearer” (taken from the pall, or cloth that covers a coffin) is one that carries importance in both historical and modern times. A pallbearer is usually a family member or close friend, someone who is both strong and young, and—more traditionally—someone who is male.

Because the act of carrying a loved one to his or her grave is such a personal one, it is a role typically reserved for those who knew and loved the person. Adult sons, daughters, grandchildren, nieces, and nephews tend to be the most common options, although there is no restriction on who can assist. Like choosing bridal attendants, this is a task that carries quite a bit of responsibility, so you want to ask people who can be relied on to dress appropriately, show up on time, and act in accordance with the tenor of the funeral.

Depending on the material of the casket and the size of the deceased, the casket can weigh upwards of 400 pounds. Understandably, this means that the pallbearers will be asked to carry both a literal and metaphorical burden. There are usually between six and eight pallbearers so that the weight is distributed equally among them, but there are still physical requirements to consider.

Historically, mostly men served as pallbearers because mostly men attended funerals. The Victorian era was the first to see women going to the funerals of their loved ones in large numbers. Prior to this, women (mostly from the upper classes) stayed at home. This was done for a number of cultural and social reasons, primarily because families did not want huge emotional outbursts at the burial. It was also common for funerals to be held at night or attended by workers from the cemetery, which meant that it might have been considered “too rough” for the ladies of the house. It is no wonder, then, that the tradition of pallbearing necessarily became a male one.

However, in this day and age, there is no reason why a woman cannot serve as pallbearer. In fact, it may be offensive to exclude women based solely on their gender. As long as anyone you ask is willing and able, there are no real restrictions in place.

If you do not have enough people to make up the numbers, you can also skip having pallbearers altogether. The funeral home will convey the casket where it needs to go with respect and care for your loved one.

Who Should I Invite to be Part of the Funeral Service?

It takes quite a few people working together to ensure that funeral planning goes off without a hitch. From the funeral director who oversees the details to the individual who stands up to give the eulogy, the best and most unique parts about a f... more »

Is Funeral Insurance Right for You?

In the funeral pre-planning industry, there are several different options you can choose from for your future memorial service. You can plan down to the last detail by advance planning an entire funeral with the home of your choosing. You can set up ... more »

In the funeral planning industry, most people associate autopsies with high-intensity drama and crime. Thanks in large part to television and the media, it is generally assumed that only deceased individuals who have died under suspicious circumstanc... more »