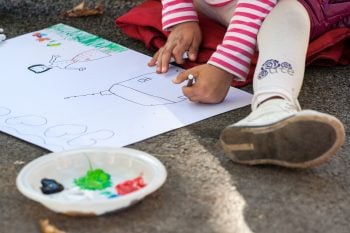 There are many conflicting opinions about children and funerals. Some families feel it is not an appropriate place for young children, especially if the body will be on display or there are disturbing circumstances. Then there are other families who believe that children need the same closure that adults do, and that depriving them of the opportunity to say goodbye is not only wrong—but cruel.

Whatever your beliefs, it is becoming increasingly more acceptable for children to be present at a funeral…not only to attend, but be a part of the actual service. Although you will always want to take into consideration the child’s age, maturity level, and relationship to the deceased, here are a few ways that you can give children a place to actively participate in the ritual of mourning.

If there will be several young guests at the funeral, you might also wish to host a separate room where they can go when they are feeling overwhelmed or if they start to get fussy. Small activities (like coloring or singing songs) will go a long way in keeping them entertained when the funeral gets to be too much. If you have the financial means, you may even want to hire an on-site babysitter to preside over these activities while the adults are at the funeral.

Funeral planning tends to be an event that involves all of the body’s senses. From the sounds of hymns playing in the background to the scent of funeral flowers wafting in the air, a funeral is a time when we are forced to acknowledge... more »

Funeral planning in the United States takes on a variety of different formats. Depending on religion, personal preference, and budget, you can end up with anything from a quiet, understated affair to a three-day funeral complete with a parade process... more »

Amarillo funeral homes are part of a long tradition of honoring those who have been a part of the local community. Although it is a fairly large area, this Texas locale puts a lot of effort into respecting all the people who have helped build the cit... more »