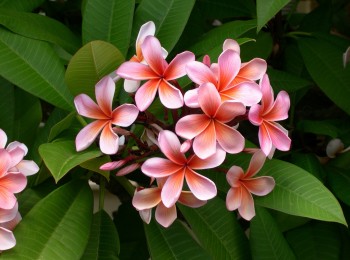 The traditional flowers to send to a funeral include roses, lilies, carnations, and irises. While these blooms can—and often do—smell as good as they look, they are not always the best choice when you want a strong fragrance. If you want to send a funeral bouquet that offers beautifully scented florals as well as an elegant look, you might want to consider choosing some out-of-the-ordinary flowers.

Many of these blooms are seasonal and/or restricted to location, so you may have to pay extra or send long-distance for what you want. For example, frangipani is a traditional Hawaiian flower (most commonly seen in leis), and lilacs and sweet peas tend to bloom for only a short time in the spring. In addition, some varieties of roses and lilies can be incredibly fragrant, but you typically have to request or specially order ones chosen for their scent rather than their looks.

If you would like to look beyond cut flowers and include some greenery and other foliage, you might also want to consider:

As you may notice, many of these fragrant flowers and foliage options are actually foods (or can be commonly found in teas). This makes them both beautiful and edible, which is ideal if you would like to send a potted plant instead of a more traditional funeral bouquet.

Check with your local florist to see what is available as well as what they recommend. They may have a particularly fragrant batch of roses, or they might suggest a less common flower that adds a nice, lightly-scented touch to the bouquet. You can also opt for scented flowers and greenery that are not on this list but that the deceased was partial to, especially if they grew it in their garden.

What to Send instead of Funeral Flowers

There’s no denying that it has become commonplace to send sympathy flowers and funeral bouquets to show your regard for the dearly departed. Adding a touch of color to the memorial service and bringing hope to the family, funeral flowers are a grea... more »

Should You Buy Artificial Funeral Flowers?

Funeral flowers (also known as sympathy flowers) are a common way to show your love and support for the recently deceased. Whether you order a large casket spray for display during a memorial service or a handful of rose petals to shower down on the ... more »

Sending funeral flowers to the funeral home or memorial service of a loved one is a great way to show your support. Long held as the standard in traditional funeral planning, flowers add a touch of elegance to the ceremony and also serve as a lasting... more »